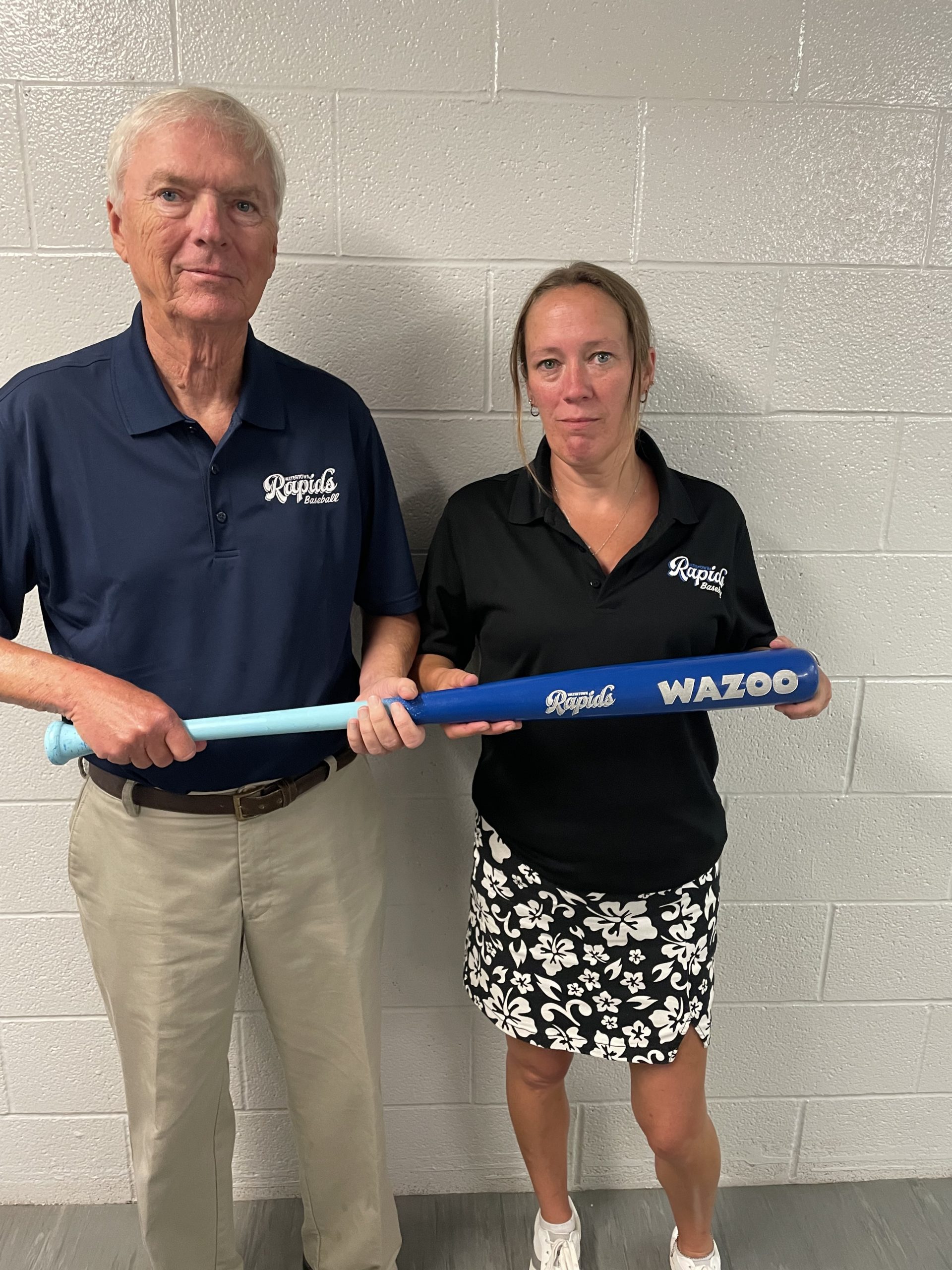 Watertown NY.  Mr. Paul Velte, Chairman of the ownership group of the Watertown Rapids Collegiate Baseball Team, announced today that the team has selected their new General Manager. Mrs. CareyLynn Schell-Parody, a Watertown NY native, has accepted the position of General Manager and begins immediately.  Mr. Velte indicated the owners of the team are excited to promote CareyLynn into this new role.  Mr. Velte also announced that they have reached agreements with Team Manager Mike Kogut, of Beaver River, NY and Assistant Coaches Dan Myers from Lowville  and Riley Moonan from Watertown to continue in 2023 as the coaching staff for the Rapids. Mr, Velte said, “We are excited to build our organization with the leadership we know we’ll see from Carey and the continued success that Mike, Dan and Riley produced in our ‘22 season.”

Dave Oster, a member of the ownership team for the Rapids who oversees team operations, indicated the owners had been pleased with Carey’s leadership in merchandising “We were impressed with Carey’s work for the team and when she came to us wanting to do more” Oster said, “we knew we had the right person to serve as General Manager.”  Oster said the owners didn’t realize until after they hired Carey, that she would be the first female General Manager for the Rapids and one of the first females in collegiate baseball history. “She was the right person at the right time for us, but we are also excited that she is setting an example for all in taking down gender barriers in sports!” Oster concluded.

CareyLynn Schell Parody, the new Rapids manager has been the team’s first and only merchandise manager.  When she joined the team in 2018, she was in a sense returning to her roots.  Her connection to baseball at the Alex T. Duffy Fairgrounds goes back to 1989.  Just 12 years old at the time, she worked helping her older sister sell Watertown Indians t-shirts and souvenirs in the merchandise shed.  Years later the Indians would leave Watertown, and so would Carey after graduating from Immaculate Heart Central School and working as an advocate for troubled youths (YAP) and then as an office manager.  She married Andrew Parody of Brownville, and the couple would  live in North Carolina and Schenectady, NY.  They raised two children, a girl AmyElizabeth now in college, and a boy Mikey in his senior year of high school.

With the kids mostly grown, Carey returned to work with a tax accounting firm as an office manager.   But when baseball returned to Watertown in 2018 in the form of the Watertown Rapids, she couldn’t resist the offer to return to the merchandise shed, this time as merchandise manager.  Since then, she has spent every summer in that shed running the team’s merchandise operation.  Carey becomes the first female manager of the Rapids, and one of the very few women general managers in all of baseball.

Returning Head Coach and Team Manager, Mike Kogut has coached locally in the Frontier League as both an assistant and head coach for the past 8 years between Lowville Academy and Beaver River Central School. His teams had much success along the way including a Class C-2 Sectional Title in 2021. Coach Kogut and his coaching staff completed their first season with the Watertown Rapids in 2022. After a slow start, the team was able to have a successful second half of the season going 19-10 over the Rapids last 29 games. Coach Kogut’s vision for the Watertown Rapids is to help the organization build a strong and sustainable product both on and off the field. He hopes the Watertown Rapids can continue to connect with the community and provide the local area support through Rapids Baseball.

One loss for the Rapids this year will be their Director of Operations, Nate Matteson.  The 21-year-old college student studying Sport Business Management at SUNY Cortland, served for two years as the team’s Operations Director.  Mr. Matteson will be completing an internship with Grand Slam Safety a growing sports facility management company based in Lewis County, during his final spring semester at Cortland.  According to the owners of the team, Mr. Matteson has played an important role in increasing revenue from concessions and attendance and managed a game day staff of approximately 15 people.   The owners are very happy for Nate to have this internship opportunity and indicate he will always have a place within the Rapids organization should he return.

Rounding out the excitement for the upcoming 2023 season will be the return of the Watertown Rapids Fan Experience Specialist, Jay Matteson. Mr. Matteson is the “showman” for the Rapids responsible for directing the entire 9 inning show, that surrounds the baseball game. The Watertown Rapids performance has become known throughout the entire Perfect Games Collegiate Baseball League as one of the best places to come to play baseball, thanks in part to Mr. Matteson.

Mr. Michael Schell, the owner/historian of the team, said, “The owners of the team are looking forward to watching Carey, Mike, Jay and Nate, when he can, continue to build the Watertown Rapids Collegiate Baseball team into an exciting and fun entertainment and sports venue.  Our brand of baseball is fun for everyone.”  Schell added, “We are excited for the players who join our team to come to our Field of Dreams, and we are really happy to create a baseball performance that our fans will love!” 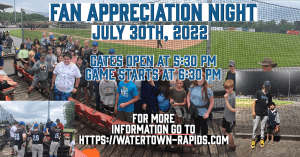 Watertown, NY – The Watertown Rapids Game on Saturday July 30th is one you can’t miss! A

Watertown, NY – The Watertown Rapids Game on Friday July 29th is a must see event! Celebrating 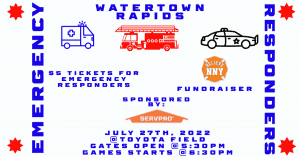 Watertown, NY – The Watertown Rapids Game on Wednesday July 27th is a must see event! Celebrating 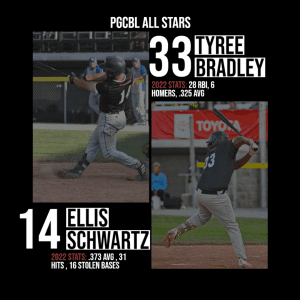 Huge congratulations our two All Star nominees this season. Both Tyree Bradley and Ellis Schwartz have been 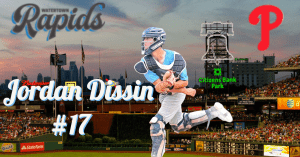 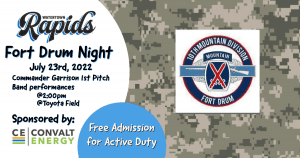 Watertown, NY – The Watertown Rapids Game on Saturday July 23rd is a must see event! Celebrating